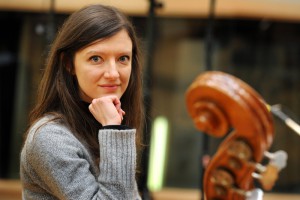 The Italian composer Enrica Sciandrone’s is a composer for Curated Place’s Moving Classics Scheme and is undertaking a residency with Psappha Ensemble which will give Enrica the opportunity to explore and challenge the divide between ‘high art’ contemporary music and composition for media/film. She is passionate about both. Through the ensemble’s vast repertoire, (ranging from Ades to Zappa) and its command of many different styles of music, Enrica will be able to broaden her musical pallet which will support her development as a composer.

Former pianist, Enrica studied traditional and contemporary composition in Italy, gradually bringing her mastery and experience to screen composition since 2005. She has rapidly achieved outstanding recognitions such as the First Prize at the Premio Petrassi International Composition Competition (2009, Latina, Italy; head of jury: Ennio Morricone), followed by a number of awards (notably, 2012 Peer Raben award at Soundtrack Cologne; 2012 Jerry Goldsmith Award in advert music at Ubeda, Spain; RMA–‐LA grant at the 2012 ASCAP workshop in Los Angeles and the 2014 Crystal Pine Award at Samobor Film Festival, headed by John Corigliano).

In 2010 she gained her MMus in Composition for Screen at the Royal College of Music of London supported by Leverhulme Trust, Henry Wood Scholarship, Fabrica Dei Talenti Scholarship and J. Horoviz award in composition for screen. In 2012 she has been one of the three composers selected for the Score Competition at Berlinale Talent Campus, scoring J.P.Zaramella Luminaris (recorded at Babelsberg Studios by Babelsberg Orchestra, Potsdam, Germany). She has composed soundtracks worldwide for several award-winning films, documentaries, animations and TV commercials. Currently, she is developing an original project in music narrative, bringing her experience as screen composer back to the concert hall.