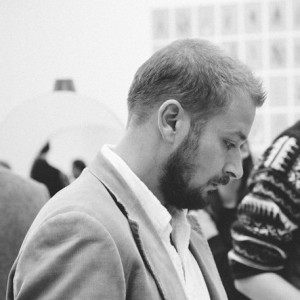 Eyvind Gulbrandsen has been chosen to work as a composer-in-residency with the South Iceland Chamber Choir. He is educated at the Royal Academy of Music in Aarhus, Denmark and the Norwegian Academy of Music, Oslo, Norway under guidance by a.o. Karl Aage Rasmussen, Bent Sørensen, Rolf Wallin and Olav Anton Thommessen.

For the last 15 years Gulbrandsen has lived and worked in Denmark as a freelance composer and a teacher in composition. His works include solo/chamber music, music for orchestra and theatre, electronic/electro-acoustic music and installations. His works often include performance, installations and scenery. He always work in close collaboration with his musicians to develop his compositions and in recent years has been focusing on the possibilities in co-creation with either the musicians, the audience, or both.

His main inspiration is the people he works with, the raw material for each piece being stories, objects or melodies regarding a certain topic or theme. Whichever route he explores his inspiration is most often the collected narratives of musicians’ lives seeing his pieces often being presented as a combination of a concert, intervention and installation; more an event, or happening, than a conventional performance.

His 2012 piece “The Changeling”, co-created with the acclaimed folk singer Jullie Hjetland, won a special award from the Danish Arts Council and his works have been performed by acclaimed ensembles and musicians across the Nordic countries, Germany, England, USA and Canada and at festivals such as UNM, Nordic music Days, SPOR festival and Klang: Copenhagen Avantgarde Music Festival.